We needed to attend the awards ceremony which was a black-tie event held in Birmingham at the MacDonald House Hotel. I had never attended a black-tie event before so of course I started to panic about what to wear, what would it be like, would I feel out of place.

I had a dress worn to a number of events previously and I had jewellery to bling and a lovely pair of shoes, so at least I was sorted on that end. Michael even got himself some spiffy new clothes. The day before, I had my nails done by Sarah from Glamourize, and I was going to have my hair and makeup done at the hotel. I don’t think we turned out too bad! 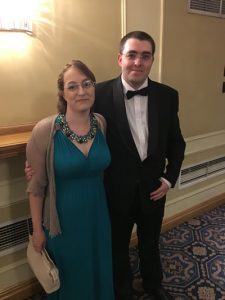 I was really nervous about going as I didn’t really know anyone apart from talking to them on the FB Group. I was worried I wouldn’t fit in or have anyone to talk. I was so wrong! Charlotte (The Bournemouth Wrap Girl) was the first person to speak to me – she recognised me from the group and she was so lovely and friendly – it really put me at ease. The girls who did my hair (Deborah from House of Hair) and makeup (Alexandra from A.B Beauty) were absolutely fab and helped me to gain even more confidence.

There was a drinks receiption to start the evening, which was quite daunting. I tried to remain as inconspicuous as possible which is no mean feat when in a wheelchair. We went to the seating plan and discovered the theme for the night was “Superheroes”. I was pleased to see that Charlotte was sitting at the same table. 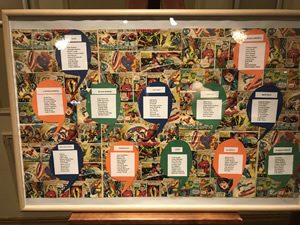 On entering the function room – all I can say is wow! The decorations, the atmosphere – it was all so amazing. There were gift bags at each table and a special sweet treat from Belles Cakery – omg the brownies were absolutely delicious!! The host for the night – Dave – kicked things off and really put everyone at ease and in the mood for fun and celebration.

Throughout the night the awards were given out between courses and everyone was encouraged to get to know each other. A young woman named Carris spoke to us about brain tumours and how the charity, The Brain Tumour Charity, doesn’t get any government funding and she hoped we would help the charity out. It was a moving talk – you could have heard a pin drop in the room.

As the time got closer to the “Against All Odds” category, I could feel butterflies in my stomach and I was really anxious. I didn’t win – the judges found it really hard to choose as all of us in the category had overcome so much – but it doesn’t matter to me because I am a finalist. It was the first business awards I had ever entered and I’m so proud of what I achieved.

The night ended with a raffle and dancing. Michael and I both won a raffle prize. We didn’t stay for the dancing as I needed to take my medication and get some sleep.

I’ve come away from the awards with some new friends and even more determination. I know my business can work – there are tons of businesses out there of all sizes that need a bookkeeper – I just need to find a way to reach out to them. There are plans for Ihelm Enterprises and I am going to work hard to put them in place. There are also other business awards out there, just waiting for people to enter them – and now I have more confidence in myself and in what I do – I will be submitting more applications.

Newsletter Sign Up
Get tax, accounting and business advice straight to your inbox. Fill out the brief form to join our newsletter. We won't spam you and you can unsubscribe at any time. Please read our privacy policy so that you know how we use your data.
Join us!
Scroll back to top
This site uses cookies: Find out more.